Mother’s milk: An ounce of prevention is worth billions in cures

22 March 2018
Baar, Switzerland/Paris, France – 22 March 2018. “It is time for breastfeeding to take its place alongside vaccines as a global primary public health intervention.” said Prof Tricia Johnson today at the press conference for the 13th International Breastfeeding and Lactation Symposium in Paris. Over 130 million babies are born each year worldwide, and only 40% are breastfed exclusively for six months, as recommended by the World Health Organisation (WHO). Although many countries officially recommend breastfeeding according to WHO guidelines, national policies and programmes are insufficient to support it practically, from hospital care to home breastfeeding support. It is time for nations to put action behind their words, and invest in breastfeeding, a preventive health measure that has the potential to yield exponential rewards for infants, mothers, and society. This morning, symposium researchers presented key scientific finding on human milk and lactation which support this call to action.
Share this content 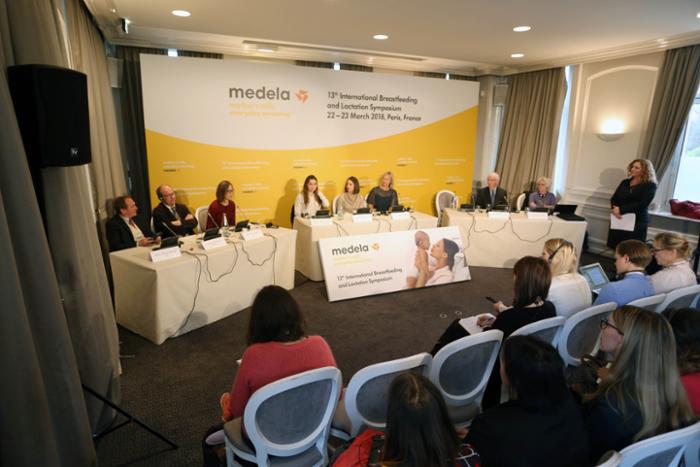 Feeding human milk to infants can:

“In truth, we have only begun to understand milk and how it helps both infants and mothers. It is an embarrassment to the entire scientific community that we have been so slow in recognizing that milk is so special. Several things about milk are causing scientists to rethink how nourishment in general can work. Milk is 'personal' 'alive' and 'dynamic'. If we could understand milk and lactation better, of course we would invest more in assisting mothers to breast feed as an International priority. We would also learn much about how we could nourish all ages.”

Prof. Bruce German, Director of the Foods for Health Institute at the University of California, Davis, is the world’s foremost expert on the unique biocompatibility of human milk for human infants, as the result of the “symbiotic co-evolution between a mammalian mother and her infant”. His recent studies have focused on how well a growing global population of premature infants is able to digest human milk. His latest research using the human lactation genome reveals that not only does mother’s milk deliver the peptides necessary to improve immune protection and development in premature infants, mother’s milk also delivers the enzymes necessary for premature infants to digest them. This research supports the increased focus in the worldwide medical community on improving the support and intervention required to enable mothers of premature infants to feed them breast milk.

“Breastfeeding must be a top priority in France’s national programme, in order to prevent an array of chronic and lifelong diseases. We need to institute a new paradigm of care in the first 1,000 days of life.”

Prof. Laurent Storm, Vice President of the French Society for the Developmental Origins of Health and Disease, is a trailblazer for his treatise on the first 1,000 days of life, from development in the womb to two years after birth. Prof. Storme presents evidence for breastfeeding as a crucial medical intervention in the first 1,000 days of life, to prevent numerous lifelong, non-communicable diseases, including allergies , obesity , inflammatory bowel disease, and to promote better long-term neurodevelopmental outcome . It also reduces the impact of painful stimuli on infants . Prof Storme highlights the fact that there are currently only 40 baby-friendly hospitals in France. He says that in order to change the way the public views mother’s milk, earlier and more widespread education on the benefits of breastfeeding is necessary, with special emphasis on education for pregnant women. To accomplish this, standardized training is necessary for healthcare professionals.

Prof. Tricia Johnson, Economist, Health Systems Management, Rush University, asks why human milk has not yet become a primary public health intervention worldwide, on the level of vaccinesBy preventing disease and boosting health in both infants and mothers, it saves short-term direct healthcare cost savings. Cost savings is even higher for premature infants, when breastmilk can prevent numerous diseases and disorders, including chronic lung disease, for example, of which costs an average of USD 40,000 in healthcare treatment per case. By improving neurological development, breastfeeding also improves the long-term performance capacity of a child, ultimately producing members of society that are able to contribute at a higher level, and boosting national productivity and income. Her new cost-benefit analysis shows the remarkably low economic investment required to feed human milk to babies, and the inversely high return on investment for society in both the short- and long-term. On a global scale, feeding more human milk, longer, to every national newborn population would amount to: hundreds of millions to billions in direct healthcare cost savings annually, tens of millions saved in special education costs annually, and billions earned in increased annual productivity. The question becomes: With nothing to lose and everything to gain, is society doing enough to support mothers and families in breast milk feeding?

“As we collect milk from mothers, we find lactating breast cells coming out with the milk. Studying these in the lab, we determined that we can stimulate them to grow as entire mini-breasts. This shows that a single breast cell differentiates into many different kinds of breast cells, in this way acting like stem cells.”

Dr. Alecia-Jane Twigger is a postdoctoral fellow at the Institute of Stem Cell Research at the Helmholtz Center, Munich. Studying breast cells that detach during lactation and are then identified in human milk, Dr. Twigger has sought to understand the molecular and functional changes that occur in the breast during lactation. Using a unique new, three-dimensional model of the human breast made from tissue which would normally be discarded after aesthetic breast reduction. Dr. Twigger has created self-contained mini-breasts with the aim of making them lactate in the lab. Her next study will seek to clarify the process of breast cell differentiation, in order to understand how abnormal development leads to breast cancer, diabetes, or low milk production.

“Each month, each week, each drop of mother’s milk has significant benefits for preventing asthma, and many other diseases. In fact, what we realize is that breastfeeding is something that we need to introduce as part of the normal way of life, in early childhood, so that society begins to truly grasp the protective benefits of mothers’ milk. ”

Meghan B. Azad, Assistant Professor of Paediatrics and Child Health at the University of Manitoba (Canada), leads the asthma research group as part of the Canadian Healthy Infant Longitudinal Development (CHILD) study. Her research has focused on studying the microbiome (the collective bacteria and oligosaccharides in the infant gut), and how it is different in infants with asthma than in infants without asthma. She is also investigating the breast milk of the mothers of the infants in the study, to understand which components in the breast milk are the most likely to influence the microbiome, and to prevent asthma. She has already ascertained that it is not one single component, but a combination of components in mother’s milk which interact to confer protection against asthma. How they interact is not yet clear. Asst. Prof. Azad acknowledges the fact that while six months of exclusive breastfeeding is still the recommended standard, any amount of breastfeeding is beneficial, and contributes vitally to disease prevention.

“New research proves that the rising incident of frenotomies (cutting the frenulum membrane under the tongue) to treat tongue-tied infants does not improve breastfeeding, and must be reconsidered.”

Assoc. Prof. Donna Geddes, Chief Investigator of the Hartmann Human Lactation Research Group says, that for several years, rising rates in reported incidents of tongue-tie have been exceeded by rising rates in surgical correction (frenotomy), intended to free the tongue to allow babies to breastfeed normally. From 2004-2013, in British Columbia, Canada, tongue tie rates rose 70% while, surgical cutting rose 89%. This has led researchers to speculate that surgery may be performed unnecessarily. This year, in Assoc. Prof. Geddes’ study group, before frenotomy, two-thirds of infants did not get enough milk from the breast, and half of mothers did not produce enough milk to feed their infants. The numbers were nearly identical after the frenotomy. Results suggest that mothers should be screened for low-milk production and offered intervention to stimulate better milk production, before their infants are even considered for surgery. Assoc. Prof. Geddes will next study which infants with tongue tie do and do not benefit from frenotomies.

“The breast has an amazing ability to adapt to circumstances and to protect the baby from receiving harmful elements which might exist in the mother’s body. It was surprising to realize, through a truly quantitative study that the amount of THC in the breast milk was substantially lower than admittedly not very robust studies had shown decades ago.”

Founder and Executive Director of the national Infant Risk Centre in the USA, Prof. Thomas Hale is recognised as the world’s leading authority on drugs and mother’s milk. Prof. Hale confronts the growing trend of marijuana legalization for medicinal as well as recreational use worldwide, as well as the three-fold increase in the psychoactive chemical THC contained in modern marijuana. It is estimated that 5-15% of pregnant and nursing mothers use marijuana. Studies have also shown that the potency of THC in common marijuana has increased from the 1960s to the early 21st century by 3-7 times, depending on the country.

Previous research has investigated the effects of maternal cannabis use on the foetus, and has shown: smaller head circumference long-term, low-birth weight in infancy, higher rates of leukaemia, reduced memory, motor-skill problems, and social disturbances. Until now, studies were unclear as to the amount of THC in breast milk. Prof. Hale’s ground-breaking new research proves that the amounts of THC in breast milk are much lower than previously measured. This means that the impact on the baby is likely to be much lower as well. However, considered even as a medicine, other drugs to help mothers with nausea, for example, are perfectly safe, and put their babies at no risk. Therefore, as the Executive Director of the Infant Risk Centre, Prof. Hale is clear: Not recommended for nursing mothers.

“The entire medical community should receive interdisciplinary training which incorporates the benefits of mother’s milk as a disease prevention measure throughout the medical curriculum, since it does, in fact, prevent a multitude of diseases that occur at various stages in life.”

Prof. Paula Meier is Director of NICU Lactation Services in the Neonatal Intensive Care Unit (NICU) at Rush University Medical Center and one of the most sought-after experts on NICU lactation care around the world. Global medical recommendations have recognized the importance of high doses of mother’s own milk for premature infants, in order to reduce deadly necrotizing enterocolitis, late onset sepsis, bronchopulmonary dysplasia (serious respiratory problems), rehospitalisation and subsequent neurodevelopmental problems. However, no standardized, evidence based programmes have been implemented to support these global initiatives. Applying the lessons learned in a special Mother’s Own Milk programme launched in 1996 at Rush University Medical Center, Prof. Meier presents a new best-practice roadmap for standardized lactation care in the NICU globally, identifying the seven major hurdles that most often interfere with successful breastfeeding for premature infants in the hospital, and how to overcome them with low-cost measures and peer counselling.

Brigitte Dumas, Managing Director of Medela France, says: “I am honoured to be able to share this important research with the public in France. The proven benefits of breast milk feeding for infants, mothers, and society make this too important to ignore, at a time when healthcare programmes around the world are experiencing dramatic restructuring . When it comes to breast milk and disease, an ounce of prevention is worth billions in cures on a global scale. From improved prenatal care, to after-birth care and homecare programmes, it is time for all the members of society in every nation, France included, to rededicate ourselves to policies and programmes that support mothers who choose to breastfeed their babies.”

Founded in 1961 and headquartered in Switzerland, Medela conducts basic research in partnership with leading scientists, medical professionals and universities, to develop world-leading breastfeeding products, education, and solutions. Find out more at www.medela.com.